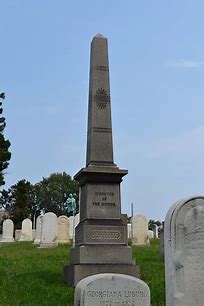 In 1856 at age 64 Hussey married 24 yo Nantucket native E. Starbuck and had 2 children. He also maintained a good relationship with the Quaker church. In the end he sold all patent rights to McCormick, the man who he had just spent decades competing with from field trials to court rooms. History says his sales were slipping to the point in 1858 he was forced to sell. I don’t believe that for one second. He won, had proven to have a superior product on a world stage, he had royal hype-men. Then to top it off he married a Starbuck 40 years his junior and had children. So you can appreciate my skepticism when he sells everything. The panic of 57’ is also used as justification, just in case you weren’t sure already, any time there is a ‘panic’ or ‘crisis’ it is always manufactured by the Resetters. These people print the money they don’t use it like the rest of the population, it is worthless except for the control aspect.

(*See the SS Central America, bank shipment of gold lost in hurricane, potential weather manufacturing event, ensuing Panic of 57 was public gold-grab and to get off gold standard and to lead into the civil war)

The ending of the Hussey/McCormick Reaper Wars is in 1860 on a train ride with his family. Hussey hopped off for a minute to get a glass of water for a thirsty little girl, when hopping back on the train he missed his footing and fell between two cars and was cut cleanly in two pieces. The rail workers just kinda shrugged and put the body back on the train with the horrified family and continued to their destination. At least, that’s what the MSM says happened. Wouldn’t you know it, there just happened to be an eyewitness to the whole thing by a Boston Traveler reporter! What a coincidence huh. The reporter saw every move from mere feet away. (I guess not so close he couldn’t just reach out to help him hold on huh?) He was able to conduct an interview with the Missus on the scene.  I’m sure that’s the thing most important to the wife at a time like this, after seeing her husband and father of her two babies cut in half the first thing, she wants to do is sit down for an interview…Hmm, that’s still a pattern with the false flag crisis actors in the media today, fake tears and everything just wanting to answer reporter’s dumbass questions. Another clue something wasn’t right was all the inconsistencies in reports, not only that but sources still today try to cover of the lack of continuity. They can’t get the town right, or the state and there is some elaborate excuse as to why their details don’t match up. The clue isn’t so much that there are inconsistencies, that is frequent, the clue is that they are still trying to smooth things out. For another thing, the excuse he jumped off to get water bc the train he was on didn’t have any is bullshit too. He wasn’t just some Joe Schmoe. This is the kind of class that travels in private rail cars. Even if he did find himself on a coach car with no water, he wouldn’t be the one to get it himself. They have slaves for that.

The eyewitness reporter account is written to make sure there is no mistake about it, I mean its very graphic about the scene itself, the manner in which the body is laid. What he’s doing is providing enough information so people don’t even think to ask questions. The fucking guy is a scumbag reporter from Boston, he’s not a coroner, or a biologist who has extensive knowledge in this kind of thing, assuring readers he died in the fastest most painlessly way imaginable yet at the same time detailing how his guts squished out his mouth and blood caused his eyes to explode, but don’t worry, after the blood drained from the head the face showed no signs of anguish. We have seen this news template before too with the trolley car accident in NYC. The reporter doesn’t even have to be there, hell the Husseys don’t even have to be there. The media just puts out a prepared statement and that’s what makes it real, whether it actually happened or not is irrelevant, if the papers say so, it did.

I take this as his retirement. He played his part; now he wanted out, to raise his family and live in the shadows. He got his 15 mins of fame. When I first was researching this, I thought he was taken out by McCormick; murdered, but Hussey is one of those families that run shit from the shadows. The most powerful and influential families you have never even heard of, the Rockefellers and Vanderbilts’ are there for the public eye. Hussey sells his patents to the monopolist, who knows how much of the ideas really are his, Im guessing not much, how much and what are his sources is up to the reader to discern. The fake beef in the patent office to keep out real inventors, notice how the World’s Fair comes along just at the time when America is starting to lose interest, the novelty is wearing off and the machine looking for a bigger venue. Once the product is finalized and control is centralized is when it changes its name to the International Harvester brand (International as in one-world New World Order), the next phase in a predetermined course. Mr. Hussey plays the role of competition and is there for the illusion of choice but only till the mission is accomplished, then he bows out. I dont believe he ever intended to win for keeps, for him it was a personal internal battle, which he won. Cyrus was much more amibitious and political and power-hungry, he didnt care how he won as long as he got full control, in the end he got what he wanted too

In 1861 his boy, S.T. Shubert, down at the patent office ruled that all subsequent reapers owed their success to Hussey, therefore the heirs of Hussey would be monetarily compensated from those that made money off of his foundational invention. Chalk another mark for the fake death/early retirement theory. Now it is written in legalese binding ritual contract that Obed is to be paid ‘posthumously’ and his family after him, probs still today. Not as if they need it, Hussey’s are still one of the biggest real estate moguls in Nantucket.