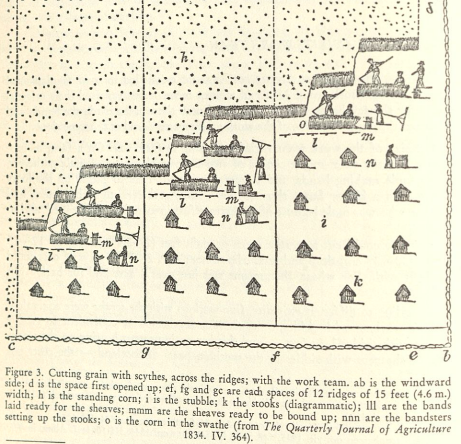 One of the most important projects of the Great Reset is to centralize control of the world food supply. Control the food, control the people.

There was a world wide race to develop a do-all farm implement that does the work of a small army of unskilled laborers. The Combine Harvester. Most people go through their whole life and never consider the importance this machine has played in many aspects of human existence… Including our enslavement.

In some perspectives the Combine Harvester allowed humans more time for recreation. Time spent in the field could now be spent pursuing other activities. Maybe. What the Harvester did was allowed the farm to produce excess. Excess product leads to commericial farms. Commericial farms can be centralized, allowing a small handful of people to control the entire food supply. This is not speculation, it has already happened as we will see.

Anytime there is a sudden burst of advancement all over the world at the same time it is no coincidence. I have come across several items that fit this desciption such as the sewing machine and dishwasher. While these things at face value seem to relieve some of the burdens of labor have you ever thought of how they have contributed to the ‘Prison Planet’ paradigm?

This was a project set on a world stage and there needed to be a way for all the Resetter class to regroup and debrief each other on developments and determine the direction and speed humanit would advance. This is where the World Fairs come in. the International Expositions of Manufacturing, and Industry… There are many names and the definition of what constitutes a World Fair is not clear, though there is a rulebook and a governing body based in Switzerland.

For many decades the Combine Harvester was front and center. The thing people have to understand is a true understanding does not come in a few paragraphs with an image and a headline. As they say, the devil is in the details. You have have context to understand why something is significant. And you have to read symbols. So much of the story is told with signs and numbers.

I haven’t yet seen a technological advancement race that just busts out simultaneously in multiple places without coming from a source. There has to be a beginning. In America, Reaper advancements didn’t really kick off till the late 1830’s on paper and even later in the field. So, when the “first” World Fair came along in 1851 we can see the international competition for the first time. All of the cloak-and-dagger operations and hidden aristocratic bloodlines had to come from somewhere.

The Society of Arts, or the Society of Government and Art was founded by William Shipley [Maritime Admiralty] in 1754 at the Rawthmore Coffee House in Convent Gardens. Another variation is the Voluntary Society for the Improvement of Agriculture and Arts. At this time in history the timeline is all bullshit anyway. None of these people were real and if they were the reality is so far removed from the school book wiki version it could be called a lie all the same. The take-away is some kind of connection between the Industrial Complex Complex and Arts. It is the Art of controlling the world without using whips and chains that these people are referring to.

Compartmentalization has done more harm to the human race than anything. Everything treated as separate, a whole entire history is a string of isolated and unconnected events, no wonder people have a hard time grasping the significance of something when they see it. These are some of the details I was talking about:

Shipley was a fictional character from the Olde World town of Maidstone. Shipley created many public improvement orgs and was noted for prison reform. Starting to see the pattern? In 1748 Shipley founded the Northampton Philosophical Society and in 1850 an art academy. The name Pars and Parsons is associated with the academy, taking that spook family back even farther.

Maidstone deserves its own investigation too. It has a history of disobedience going back to the 1300’s, is famous for its jail, historic importance in the printing history, and has an Iguanodon dinosaur for its magick sigil. Its significant because dinosaurs debuted at the World Fair, and the very first dinosaur was discovered at the same location the World Fair was conceived. That makes perfect sense bc dinos are fake. The mayor of Maidstone signed the death warrant of Charles I in 1649, (remember him?) its all scripted false narrative.

Convent Gardens is a City of London entity which includes the Royal Opera House and the Freemason Grand Lodge. Location is a biggie. Important pieces will have no meaning if you don’t recognize the location for what it is. One way you can recognize location is by architecture.

Shipley wrote proposals down calling for ‘public spirited’ people to start a group that rewards money prizes for advancing the field of sciences, arts, land improvement, reforestation, farming methods, etc. He passed his proposal privately in and around London, the first president and secretary were all blue blood aristocrats. So, what we see is early philanthropic private-donor fund that reward their own people and control the path and speed of development by only funding special interest projects.

The very first meeting was held on March 22, 1754. No shit. The Ministry of Truth wiki says so. Remember the date 3/22, the Skull and Bones Society out of Yale. These dates are symbolic, part of the numeric code I mentioned earlier, and have been inserted after the Reset as part of a self-validation claim to authority; just like the number of Art Society members go from 11 to 3, 000 in the first year. No they didn’t, they insert those numbers as signals. It’s a form of communication. If you know, you know, and those numbers are a bullhorn that says ‘look, here we are’. The art world has always been a hiding spot for spooky intel agents.Art is a visual representation of something, in this case a fake history. History is remembered through paintings and sculptures, if you can control the past you can control the present. The stated mission is to help drag the not-haves out of the gutter and just make things better for everyone with nothing in return. Shipley is said to have spend much energy developing a type of fuel for the poor. For the sake of this article we will stick to the farming theme; the Society offered cash rewards, called premieums for certain catagories, one of the first being improved agricultural methods such as growing the best trees which was considered of military value because of the wooden shipped Royal Navy.

Past members include Steven Hawkins, Charles Dickens, Nelson Mandela, David Attenborough, Tim Berne-Lee (inventor the World Wide Web), and Karl Marx, the list just goes on and on; this is a training ground, a recruitment pool. Ben Franklin openly criticized it and declared it to be a mistake and the opposite of American Interests what proper businessmen do, as if anyone that could possibly consider donating to the fund can only have the best intentions at heart. That’s just cover and advertising, Franklin was such a supportive member they give out a medal in his honor. His involvement shows it was an international org.

The Art Society that got its start up in 1754 is touted as the Worlds first but like the Harvester itself, this is not true and is there to promote nationalism, patriotism, invisible boundaries… Compartmentalization. anytime you see something pop up everywhere all at once it should lay your ears back.

In Ireland there was Dublin Society for the Promotion of Agriculture, Manufactures, Arts, and Sciences, founded by philanthropic do-gooders on june 25th 1731, namely a Thomas Prior for “improving husbandry, manufacturing, and other useful arts”. The first few years were focused on tillage technology (plow), land reclamation and forestry, among other agricultural themed projects. There is a whole array of names and dates associated with this but we wont get in to them right yet, its all fake history so for the most part lets just hit the relevent stuff. Here it is only important to understand this group did in fact exist, albeit on paper only.

In Scotland we have the Edinburgh Society for the encouragement of arts, sciences, manufactures and agriculture. This one goes back to 1754 but its predecessor is the Select Society which goes back even farther and was founded by a painter with the stated goal of “improving the members art of speaking”. It too paid cash awards for achievements of merit in the agricultural arena.

America has one too, the Philadelphia County Society for the Promotion of Agriculture which awarded premiums for agri-tech developments, even though its at a later date of 1785 and no mention of art in the name of the society the location and founding members qualify it in my book enough to show this is an orchestrated international event, well not yet, it will become that at the World Fairs.

Even the Russians have their Free Economic Society which offers financial incentives for agrarian advancements starting in 1765.

They tell us its bc Europe is coming out of the dark ages and all this knowledge has been forgotten. Thats bullshit, these are the kinds of things we would expect to see if a group of people were trying to repair the Earth after some sort of catastrophic event. The word Mudflood is a loaded term but it is appropriate. If it sounds like the same script over and over thats because it is. Seek out patterns; once the scriptwriters think they got a good formula they stick with it.

Another item worthy of note is all these early philanthropic groups pushing technological advancements are including dye stuffs. This is another tell. tailors, merchants, weavers or anything associated with the textile industry. Some sources say this is a reference to the Phoenicians and Babylon that had monopolies in the dyeing industry but since those sources are Nat Geo you can dismiss it as bullshit. Sorry chump, no Phoenician Navy.

In 1780 a reward was offered for the best reaping machine by the Society, as agriculture had become one of the categories for consideration. Nobody collected for some time but the results of the offer were all based of a description of Galic contraption mentioned by Pliny. Of course they were, cuz Pliny was scripted in by the same people that wrote the early Art Spook societies

Later Prez of the Art Society, Prince Albert, put out there the idea of forming “Periodical Expositions of the Products of Industry”. The suggestion was made in 1845 and the subsequent organization formed was the commission that handled the World Fair in 1851. The World Fair Commission was under Royal authority but was composed of the inner circle of the Society of Arts. This period is when they received the royal charter. The royalty are just figure heads with no real power. These international industrial expo’s were coming whether Prince Albert was there or no. The art spooks are the ones that put him on the throne to begin with.

Now we have jumped several decades into the future and people all over the world have been working on their reaper machines the whole time. There is a race to be the first one to complete the challenge. The World Fairs presented an opportunity for world leaders to get together and check progress and plan for whats next.

So far the work has all been done regionally or in some cases at a state competition but never before were everyone brought together at the same time.